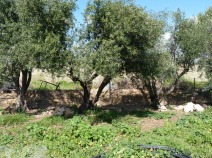 It’s a beautiful day in uptown Arodhes if a tad windy…a great day for drying the washing. I have been here three weeks and in that time I have been in turn: pleasantly warm in the February sun, rained on non-stop for a week, snowed in, iced out, and hailed on, freezing cold and now back as you were, pleasantly warm in the February sunshine. Such is the roller-coaster ride of early Spring weather in Cyprus. I have been told though that this winter has been exceptionally harsh and prolonged.

Yesterday I had a day planned to go to Limassol and the day was perfect, clear blue sky and the temperature hovering around 20 degrees. My first port of call… pardon the pun, was to visit a young pioneering couple, Maria and Peter in Polemidia on the outskirts of Limassol and fast becoming swallowed up in the ever-spreading town’s suburbia.They arrived in Cyprus just a year ago with a vision of setting up an organic farm on Maria’s father’s land in Polemidia. Peter is American from Long Island originally and set out to study art but somehow got side- tracked into farming after doing an internship on an organic farm in Kentucky. To quote from their website Parhelia : “He completed apprenticeships through ATTRA on organic farms in three different states in the U.S., where he learned how to grow vegetables organically, save seeds, raise healthy animals and generally live off the land in sustainable ways. His favourite Cypriot foods are and tahinopita.”

Maria also studied art in the States after gaining a Fulbright scholarship which stipulates she must return to Cyprus after her studies for a set length of time to work in her chosen field of study.”She is a visual artist, educator and food lover. She has worked in an art museum, a university, an organic dairy farm and a farm-to-table restaurant, among other places. Having grown up in Cyprus, she recalls summers eating under the grapevine, chickens, and other living things her grandfather used to tend to.” So between them they worked out a plan for the future to combine both their loves of food and the land and have after a lot of hard work established the beginning of their dream. Such a project will take time to establish and develop into a thriving business of course but the enthusiasm and perseverance are there. It will take time to get to know both literally and metaphorically, how the land lies, what crops work best which crops take too much labour and which just grow themselves. Already they have discovered that the climate and soil of Cyprus enables most crops to grow vigorously and well, a walk around the plot showed evidence of this with some huge cabbages and cauliflowers that would do well in any garden produce show in the UK.

The land is divided up into two sections one where the crops are grown and one that is ear-marked to be more of an orchard. At the moment it has olive trees and some young fruit trees with many roaming chickens and a few clutches of young chicks. A magnificent white cockerel was showing whose boss and strutting his stuff. Amongst the many crops grown and planned to be grown, the crops available to harvest at the moment are :- cabbages, cauliflowers, chard, Cavalo Nero or Tuscan cabbage, some beautiful tender stem  broccoli, enormous fennel, kale, parsley, radichio and eggs. Every Saturday morning they open their doors to the public to allow them to come and buy this great produce. Check out their website Parhelia for details of where they are and times they are open.

As my regular readers will know, in the UK I belong to a community garden and whilst talking to Peter as we walked around the vegetable plots, I realised how much I had learned during my time there. Happily chatting about using liquid nettle feed and natural ways of deterring pests, recognising the crops common and not so common. We sat happily chatting in the sunshine talking of their plans and eating the delicious kataifi made by Maria’s mother as part of the Green Monday celebrations.

In Cyprus now there are quite a few small groups of people who are keen to move in a different direction to the focus of the majority and in a way go back to the roots of a way of living that, until very recently, was the norm all over Cyprus. In so doing they bring with them techniques and knowledge which will enable a better, healthier way of life without the hardship of previous generations and a much more environmentally and ecologically sound way of living on the land and working in harmony with nature. This island has so much potential in terms of its younger generation and riches of the land, I believe the future is very bright. I hope in my own very small way I can show examples of what is happening and showcase the people I get to know about and meet and in so doing promote Cyprus.

Pater and Maria admit is isn’t easy but they knew it would be a challenge maybe the reality was harder than they imagined but they are here and doing it. Please support them by visiting on a Saturday morning to buy their beautiful bounty, the crops are ever changing, broad beans, peas and artichokes are on their way as well as many more crops when in season.

Follow Androula's Kitchen – Cyprus on a Plate on WordPress.com